I hope this month’s newsletter finds you well and in good spirits despite the fact that we are living through history. In our last newsletter, we went on an architectural scavenger hunt and identified both features and styles of our built environment. In this addition, we are going to take that knowledge and go on another journey, albeit virtually, and look at historic structures on-line, and perhaps in person someday.

Why should we care about historic houses? These relics are often just a blur as we zip past going about our daily routines. What do they have to offer us now? The answer is many fold. For many historic structures, they offer the full expression of that culture for that time period for that socioeconomic class. This is true of houses from all socioeconomic backgrounds, from the modest Usonian houses Frank Lloyd Wright built for the middle class to the sprawling houses of our fore fathers. These houses have stories to tell from the material culture, including how structures were built, the materials used, how they were curated and decorated, and how people lived in them. More importantly, “how did these spaces function in the lives of the people who built and lived in them?” (John R Clarke, The Houses of Roman Italy). Clarke was asking this of the ancient Romans, but the question applies universally, because there is a huge gulf between how we live now versus fifty or a hundred years ago (or longer).

Surely, how we currently live and our built environment have elements in common with the past- we all have to earn a living, support ourselves and our families and live within a shelter, but there are significant differences between how we lived in our houses a hundred years ago, versus now. One of the biggest differences that had an impact on how we use our houses now versus in the past is domestic service culture. In 1900, forty percent of all women who were working, worked as a domestic. In 1930, that figure dropped to 29.8 percent.1 In 1900, that was almost two million women working as a domestic. Houses of this period and before reflected our culture of domestic servitude, which has virtually, if not entirely has disappeared within a few generations. As a teenager, my grandmother was listed as a domestic servant on the 1930 census living in the household of another family in Pittsburgh. The point being, many domestic servants lived with the families for whom they worked. Throughout Baltimore, and other cities, house after house contain remnants of servant’s quarters in the attics and above the garages (the carriage house), which are not limited to the wealthier neighborhoods. How the domestic servant culture shaped our houses during the times when they were employed, was to wall off the social areas of the house with the functional working areas. This meant that the kitchen was always behind wall and door, cordoned off from the formal dining room. The utility of the kitchen and the formality of our culture resulted in residences reflected exactly that –formal spaces walled off from the utilitarian and working spaces of our houses. Wright even labeled kitchens as “kitchen workroom” on plans. Historically, the kitchen was not a social gathering space. In some of the mansions along Eutaw Place, in Baltimore City, home to Baltimore’s early wealthy, the kitchens were often in the basement, and the servants lived in the garret or attic in a very white tiled, Downton Abby-esque manner, but without the cool accents and landed gentry. 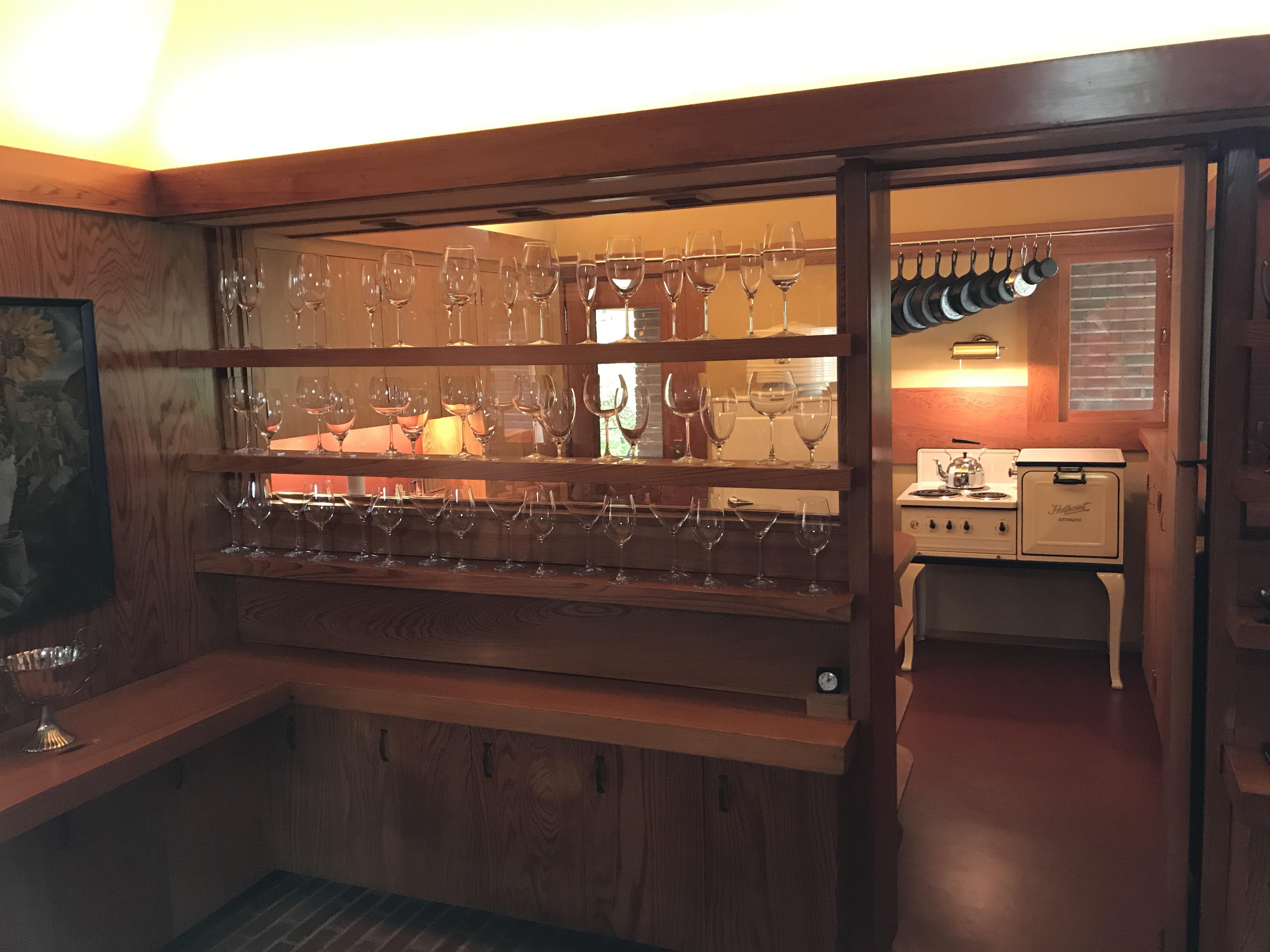 The distinction between the utility of the kitchen and the formality of the dining room were created by 19th Century social norms that no longer exist. This one wall that separates the kitchen and dining room is a metaphor for constant change in our social and cultural attitudes. Gone is the 19th Century servant culture. It may be surprising to learn that the wall between the kitchen and dining room did not come down (at least partially), until 1934 with the design and construction of the Usonian Willey House in Minneapolis (1933-1936). The lady of the house did not want a wall separating the kitchen from the dining area. Wright’s solution was to create glass partition between the kitchen “workroom” and the social space of the dining room, but Wright did not remove the wall entirely. The kitchen sink is just on the other side of the partition. It seems that Wright couldn’t quite cut the tether from the social and cultural norms of the day, but the result is a sledgehammer to the metaphorical wall separating formal social space from workspace. In this case, change came from a humble middle class Usonian design, not from the wealthy class, where historically, design trends are established. For a history and virtual tour (photographs) of the Willey House, follow this link: http://www.thewilleyhouse.com/, or in-person, 255 Bedford Street SE, Minneapolis, MN 55414

While we continue to be penned in our own domiciles, we can pay a virtual visit to other historic homes, including Hampton mansion (1840’s to 1860’s), in Towson, Maryland. Hampton Historical Site is run by the National Park Service.

“Once possibly the largest private home in America by 1790, the Hampton mansion serves as a grand example of late-Georgian architecture in America. Hampton is also the story of its people, as the estate evolved through the actions of the Ridgely family, enslaved African Americans, European indentured servants, and paid laborers within a nation struggling to define its own concept of freedom.” – from the National Park’s website.

Hampton might be the first house entrusted to the National Park Service. One of the more interesting aspects of the house isn’t necessarily the architecture, which is a large Georgian house that was possibly the largest house in America at the time of construction, but rather the fact that 95% of the art and artifacts are original to the house. Many historic houses have pieces from the time period of the house and maybe a few pieces loaned by relatives or descendants, but it’s quite special to view original furnishings and artworks collected by past owners, and in this case, collected by the Ridgelys. The other point to keep in mind (at Hampton, or any historic house), is that visitors are experiencing the artwork as it was originally displayed or intended, which is to say, not on the wall of an art gallery, but in a private residence. During the 1800’s one of the former owners brought back several paintings from her grand tour or Europe which are on display in Hampton.

One of the best features of visiting Hampton virtually, is its 3D application through Matterport, which is a 3D photographic recreation of the interior where visitors can move to different points of interest within the house. One can view artwork, furniture and other belongings all without the risk of being scolded by a docent for getting to close to a display! Another virtual way to visit Hampton National Historic Site is by using google maps by clicking here; https://goo.gl/maps/dAwn6PmMsnBMzjjW7. 535 Hampton Ln, Towson, MD 21286. To imagine how big the 25,000 acre Hampton estate was, try zooming out and superimposing more than half of Washington, DC (43,700 acres) over the area, or all of Walt Disney World (25,000 acres). Using Google Maps 3D feature, one can zoom in and rotate the map to get a bird’s eye view of the gardens and the house. While not as sleek as the Matterport app, Google Street view is available for viewing inside the house, which includes a more thorough description of the artwork. Finally, it’s worth noting that if you collect passport cancellations for your National Park Passport, you can now download a virtual tour cancellation, and print it out for your passport.

We can make another virtual journey, and it’s not too far to travel, just over to our desktop and visit the Governor’s Palace from Colonial Williamsburg, Virginia. While Williamsburg streets are lined with restored houses of the Colonial period, the Governor’s Palace is a recreation. The original structure burned in 1781 and the structure we now see was rebuilt and opened in 1934. The original structure was home to two post colonial governors, including Patrick Henry and Thomas Jefferson. Decorated in the period of the Royal Governors, it’s an imposing brick structure meant to represent the power and authority of the King in the colonies. If you can make it past the musket and sword lined entrance hall, (meant to intimidate visitors) make an immediate right into the parlor. Click on the box with arrow and you’ll be rewarded with a list and description of the furniture in the room, each of which can be examined in more detail. http://virtualtours.colonialwilliamsburg.org/palace/

One of my favorite houses to visit is Jefferson’s Monticello, or “little mountain” in Italian, near Charlotsville, VA. Jefferson’s vision of American architecture is on full display at Monticello, which was an architecture that reflected the rebirth of ancient Greek and Roman ideas, not the Georgian Architecture of Great Britain or the Governor’s Palace. Started in 1768, Jefferson continued to tweak and remodel Monticello until his death in 1826. While serving as Minister to Paris in 1864, Jefferson was staying near the Hotel de Salm and was so smitten with the building, he remodeled Monticello and added its iconic octagonal dome upon his return. 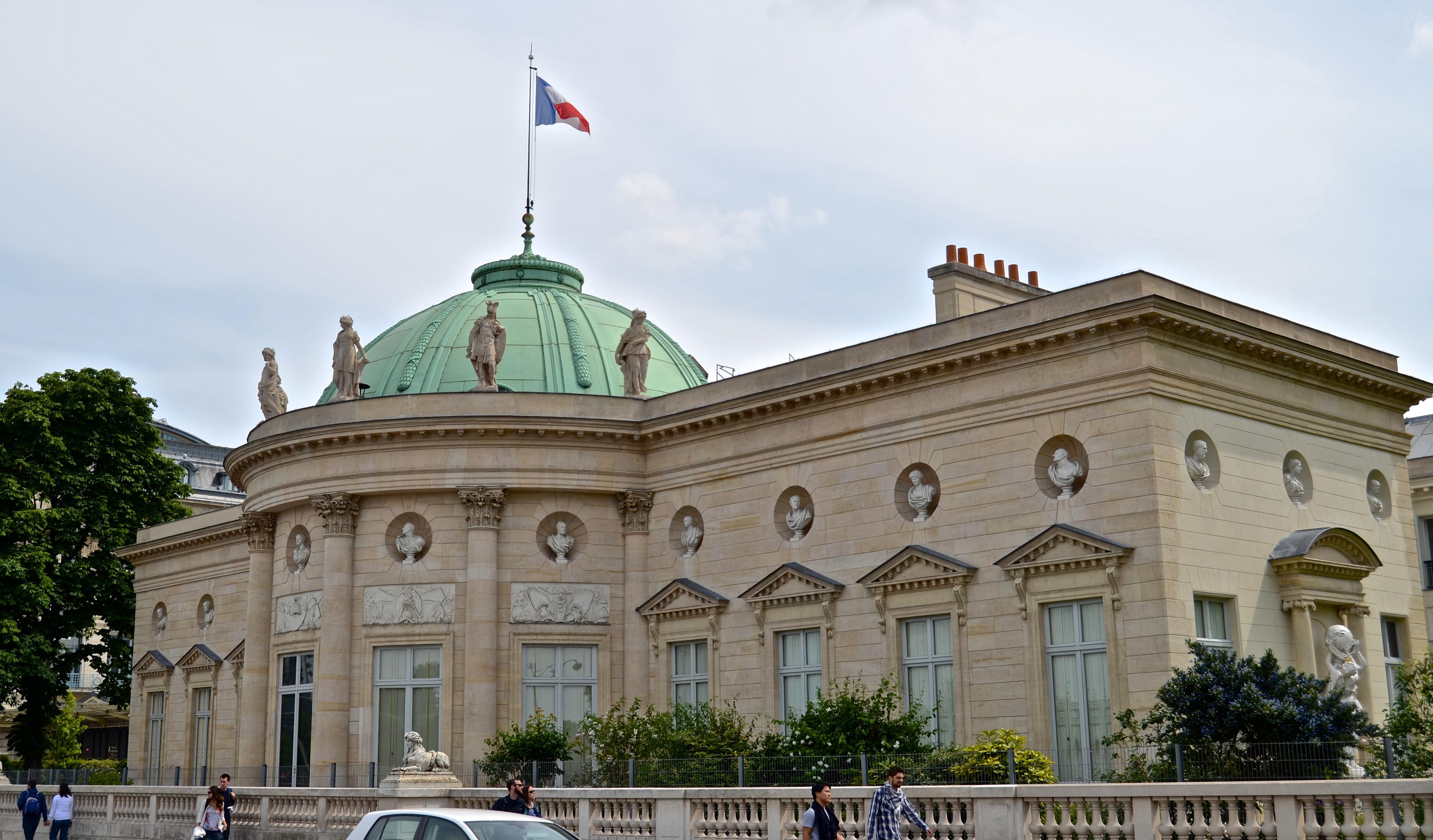 Monticello is full of original artwork, furnishings and artifacts collected or designed by Jefferson himself, including the great clock in the entrance hall. You can view the Edgehill portrait of Jefferson, which is on the two dollar bill in his daughter’s sitting room. One can also visit the dome room with its oculus. Finally, and maybe most importantly, one can visit Mulberry Row and the simple slave quarters of the Hemming’s family. Digitally, or in person, the Hemming’s display is a dramatic and sharp contrast to the main house. The cabin is a simple log structure with exposed wood beams. The cabin contains few features, including a bookshelf, fireplace, attic with stairs and a floor pit for storage. There is a lot to explore virtually at Monticello, including visual, print and audio displays. For a digital tour of Monticello, click here.

There are more well preserved historic houses and villages to visit both virtually, and in time – in person. Whether its a simple slave’s quarters or an elaborate mansion, these houses all have stories to tell and through technology, we can now visit them from the comfort of our own homes.

Or, What is Behind that Wall? If you live in an older home, (and we’ll just say built sometime between the 1880’s and the 1960’s), and you’ve never lived through a bathroom renovation, what’s behind those walls and under the floor might come as a bit of a surprise. Often, these hollow spaces beneath the…