What started out as a wedding promise of more closet space exploded into a total remake of an Evergreen area cottage into the “King of the Hill.” The original house has a half second floor that was dark and barely able to stand in except in the hall area. The home had only one bath in the living area and life was confined to the first floor. Closets were needed and it was thought it would be nice to have them on the same floor as the living space, hence the need to expand. The client worked from home a great deal of time and he owned the adjacent lot on a dead end street in a lovely quiet neighborhood, why not stay!!! As often happens, when Architect Steven Hill of STH Design showed the possibilities for expansion the project took on energy of its own and the final result is impressive. As the planning went on it was decided that to the extent possible the new structure should be as maintenance free as possible and several tasks were added to aide that objective. Working in our favor, the home was balloon framed and the exterior walls extended above the new second floor level . Working against us, the Jerkin roof design necessitated setting the ridge beam off center so the posts that would support it would bear on the existing bearing wall of the home since the ridge did not extend to the outer home wall. Always odd how these details come back to haunt you.
Air conditioning was to be added to the new area as well as the existing living space and basement office. How??? 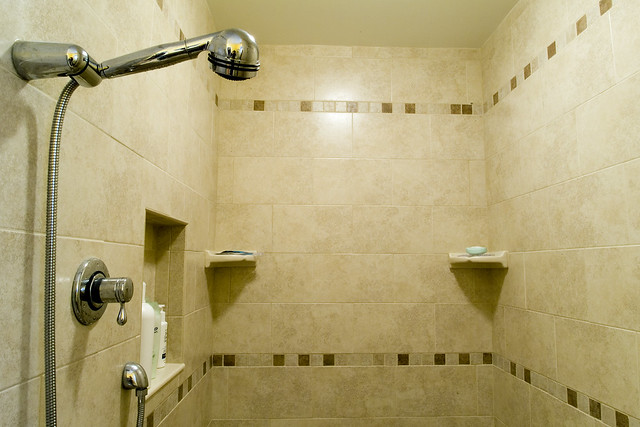 Since the clients were going to occupy the home while it was remodeled we needed two areas on concentration, cleanliness and the need to keep the home water tight during the demolition and framing. We anticipated beginning in the fall of the year and Katrina had just devastated New Orleans. We all figured we’d have some sleepless nights to look forward to. We lucked out and had eleven dry days that we took great advantage of putting all the companies resources to work in one location. A third floor that was to be a shell only, soon became an exercise room and new bath needing window seats and other amenities that would conceal the duct work and utilities. An attic floor was then created to make the home a true three story building with the A.C. units moved to the attic.
It was decided that the new areas would be heated and cooled with a separate hard duct system and that the original spaces would be cooled with a High velocity system installed in the attic and fished through the new and existing structure. I’m happy to say there are no visible ducts in the existing area although one ceiling in a hall was dropped a few inches to conceal high velocity pipes.

The addition tripled the available usable space in the home taking the main area from 900 to 2400 sq feet. With the air conditioning included the cost per sq ft was approximately $170.00 well with in an acceptable range.

The project has resulted in a functional space that now is able to better serve the clients needs. Pella slim shades were added to the lower sashes of all the second floor windows so additional window treatments would be optional. Two new baths , a dressing room and walk in closet (fulfilling the promise) give the home a “Master Suite” so popular in modern floor arrangements. Visiting grand children now have adequate space, their own bath and closet and the first , original floor now serves as guest quarters with its own bath. The new exterior is now maintenance free with a shake exterior look blending into the neighborhood of 100 year old cottages. While the home is impressive it does not dominate its site. Our clients feel comfortable knowing they can spend their life pursuing their interests rather than maintaining their home.