Our client recently moved to the Baltimore area and had had a love affair with her New York kitchen which she left behind. We were referred to her by the original cabinet companies, one of our long time suppliers. The space was being prepared by a General contractor James Huber and Co. And all we had to do was squeeze a big kitchen into a some what smaller space.

We needed to employ some arm twisting to get the vendor to release copies of the original order for the new kitchen. The finishes had to be an” exact” duplicate of the original. Hours of phone calls and numerous measuring trip later you can see the spectacular results. 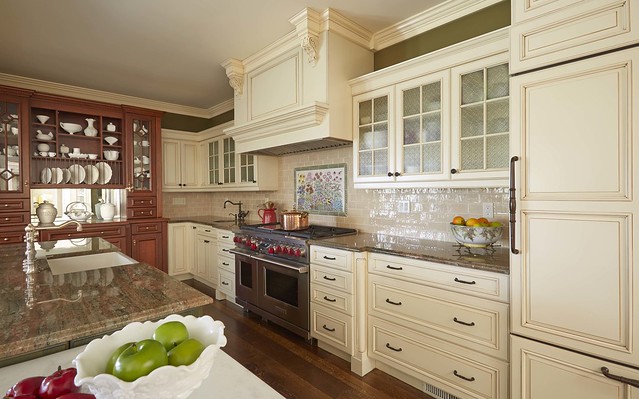 Dimensions vastly different from the original required all the cabinets to be modified and several accessory additions, deletions and modifications. Coordination with the general contractor lead to some construction modifications as well to be sure all the details were handled. We also were working at the same time to plan and execute two other kitchens in the same home, one in a studio and one in a butlers pantry like situation. Working around the other trades was interesting in this instance since we were not the providers of those services.

Cost for the total job including appliances that the home owner provided was likely in the $125,000.00 Range.

The benefit of course is a well organized space that fit the customers expectations in every detail that we were able to flawlessly executed.