This kitchen needed some work !! We were called in to increase the efficiency, function and appearance of a kitchen that had been added in the mid fifties judging by the materials and cabinets used. The layout was poor, the appliances seemed to sit in the middle of the floor, there was no counter space, the ceiling was too low in half of the room since “the easy way out” had been taken when installing the previously added steel support . The flat roof above leaked and ponded water the traffic flow was poor since the kitchen door was the main home entrance from the rear garage, and intruded into the work areas. Our investigation of the structure indicated an addition in an addition which is always a remodeler’s nightmare . The sub floor was on three different levels and there was a large hump over the original foundation where settlement had occurred.

The object of the design was to come up with a functioning kitchen, improve the flow in the room and “RAISE THE ROOF”. A deck on the rear and some other alterations to an adjacent sun room would also enable us to achieve a better use of the entire rear area of the home. 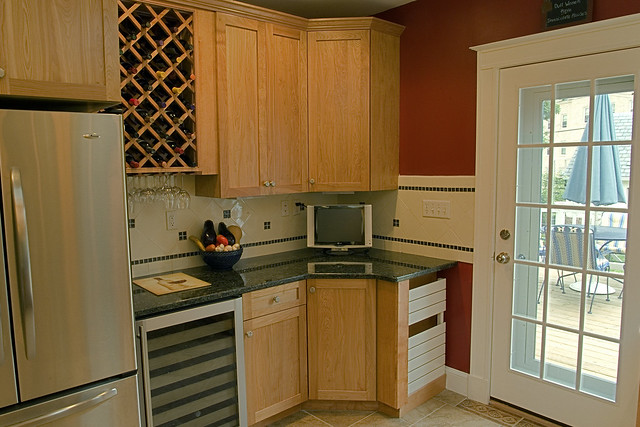 The footprint of the overall room increased by roughly 16 sq Ft, space that was captured from an adjacent laundry area refurbished as part of the job, but the apparent size of the room grew with better appliance integration, increased light and the higher ceiling. Total job cost exceeded $100,000.00

The project has resulted in a brighter, functional space that meets the families needs. The addition of windows and doors in the homes sun room now enables a circular flow onto the new rear deck which act as the entertainment hub of the home. The clients no longer freeze in the winter nor hunt for a bit of counter space on which to place a hot dish. There is even room for the tea pot collection in the glass front wall cabinet and the dogs dishes under the raised wall pantries. We had advised our clients not to move from their convenient “in town” location and I’m happy to report that they now are glad the took the advice.