Our client, a repeat customer, recently  moved into their “new” home.  We had some familiarity with this home having remodeled it for the previous owner!   Small world indeed. We had accomplished some minor remodel upon our clients to tide them over until plans could be drawn for  a bigger kitchen and a more inter-active and opened  floor plan. There was also a need  for a guest room/office, mud room and lots of additional storage capacity and closet space.  It broke my heart to tear out a deck , kitchen and other features I had personally added to the home but hey! Let’s have at it.  We would be building over a previously added addition and even taking on exterior landscaping which we seldom get involved in.

Our client hired Stewart Macklin to design plans for the work and those plans were then modified by the design team at Thomson who also in concert with the home owner worked on the kitchen plan both from a functional as well as an aesthetic perspective. Air conditioning would be needed in the new space and the existing system would need to be modified to account for all the interior changes. The existing kitchen was utilized to create an office that could double as a spare bedroom, an existing powder room was converted to a conventional hall closet and some of that space added to the office. New flow patterns were created moving doors and expanding openings. Important consideration was give to flow both inside and outside the home. The side porch and deck are connected by steps and two doors allowing access to the out side from multiple locations. Plans are in place for a future hot tub behind the deck! Since the mud room would now be on the drive way side an additional porch with coving was added since that became the main home entrance for family and close friends. While large windows were a part of the original contract, the size of the room demanded additional light and the addition of sky lights Cost and Square Footage The addition footprint consumed 500 square feet but a portion of that replaced a dated den on a lower level. The area of the Home increased by approximately 300 sq ft with the deck and porches adding an additional 300. Cost of the job was with in the customers realistic budget. Benefits The project has resulted in a brighter, functional space that meets the clients needs. The mud room is ample for dropping off the back packs , and serves as a pantry as well. An eat in kitchen is now the family center with T.V. wall mounted and plenty of work space at the kitchen island for extra cooks and a buffet line. Notice that the view from the inner portion of the home is wide opened with the working portions of the kitchen shielded by the high display cabinets holding the family artifacts. Notice the serpentine tile interface with the hardwood floor delineating the work area in the kitchen The creation of new entrance to the kitchen enables a circular flow onto the room and exit to the outdoors where the emphasis was shifted from the front of the home to the newly re-landscaped side yards. Cool comfort in the hot Baltimore summers is an added benefit of the entire process. 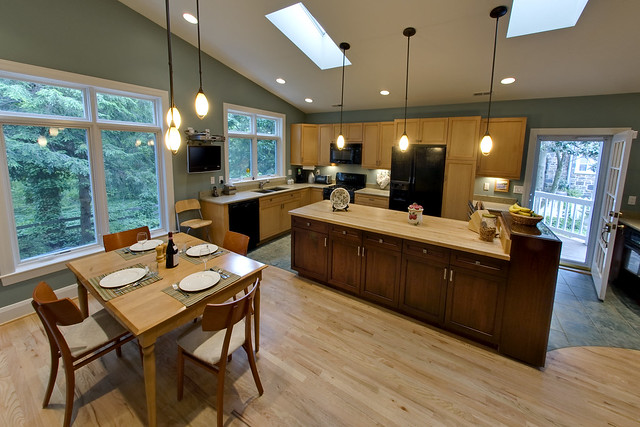