Our clients were familiar with the neighborhood of Homeland and its lovely, well-built homes when they returned to the Baltimore area several years back. An architect owned the home previously and at some point in the home’s history, remodeled the master bathroom. The bathroom featured a large soaking tub that was accessed through a walk-in shower. The configuration of the room seemed to work for our clients. One of the main problems with the design however, was the fact that there was no shower door and no threshold so water sprayed out into the area just in front of the vanities.

Someone had installed a piece of PVC to serve as a makeshift shower curb, but for safety reasons, this was not a long term solution for our clients. Since the room was remodeled in the late Eighties or early Nineties, all of the finishes were out-of-date. The last problem with the room was that it tended to run on the cold side during the winter months. Our clients wanted an updated room and a solution to the problematic shower.

While in the process of remodeling the master bathroom, our customers wanted us to remodel a jack and jill bathroom as well. 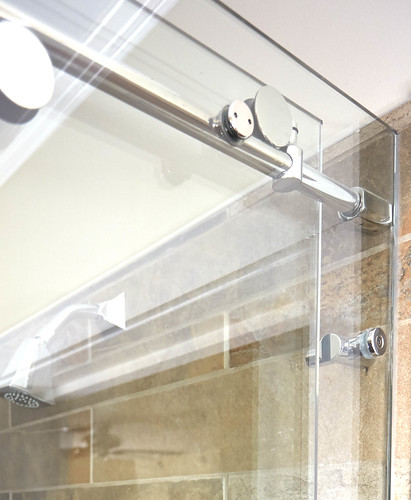 Since the basic layout of the room was to remain the same, the project designer came up with an updated, fresh look for the room while at the same time, solving the shower problem. The new color scheme was to be warm earth-tones. The room was completely gutted and a new scratch shower installed using a Wedi pan and wall system with threshold. New his and her shower faucets were installed opposite each other – a feature lacking in the original design. A Skyline door for Cardinal Showers was installed raising the cool factor tremendously. The existing tub was reused and reset in an updated platform. Large 12×24 Hyper Klondike Gold tile was installed throughout the room and in the shower was cut down in size as the tile went up the wall. A Kimbler Silestone top was installed over new cherry Bridgewood vanities. A new seven day programable thermostatically controlled heat mat from WarmlyYours was installed beneath the tile floor. All new hardware, accessories and lighting was installed.

The cost of the master bathroom was over $31,000 and the square footage was roughly eighty-four square feet.

Water on the floor is no longer a hazard and the makeshift PVC is gone. The room now features dual shower heads and the room is warm and inviting with neutral earth tones.